I think the three ‘Rs’ of Reading wRiting and aRithmetic should be expanded to the four Rs and include Rhetoric or oRacy, in other words: talk should be an essential core component of a good education. Schools should do their utmost to ensure children read well, write well, do their sums well and talk well.

The EEF reported this week that modest gains in English, science and maths can be made in upper primary school if pupils are taught in a way that uses the dialogic teaching methods as proposed by Robin Alexander. As it puts it, in the interim report, ‘Changing Talk, Changing Thinking‘, the approach to classroom talk is a specific method:

defined and developed by Robin Alexander, [which is] in contrast with some other approaches to oracy…

So this is not just about talk in the classroom, nor about just any method of approaching talk, it is specific to Alexander’s version of dialogic teaching. His approach:

attends as closely to the talk of the teacher as to that of the pupil, because it is through the teacher’s talk that the pupil’s talk is either confined within the tightly controlled boundaries of recitation or encouraged through discussion and dialogue to enlarge its discursive and semantic repertoire and hence its cognitive power. Hence the focus… on the balance of closed and open questions, recitation and dialogue, and brief and extended pupil contributions. For while dialogic teaching, again unlike some other approaches, accepts the need in certain circumstances for closed questions, recitation and brief pupil contributions, it also affirms that unless the quantity and quality of pupil talk is extended well beyond these traditional patterns of exchange into a much more extensive interactive repertoire the full communicative and cognitive potential of classroom talk will remain largely unrealised. In the end, therefore, it is the pupil’s talk that matters most, and it is to the teacher’s agency in securing the enhancement of pupil talk that dialogic teaching is directed…

Alexander’s 11 categories of ‘learning talk’ (narrate, explain, analyse, speculate, imagine, explore, evaluate, discuss, argue, justify, question)… were modified for coding purposes as 12 sub-types of extended pupil contributions which also include pupil responses to some of the key teacher talk moves. The modified coding categories for pupil learning talk were: expand/add, connect, explain/analyse, rephrase, narrate, evaluate, argue, justify, speculate, challenge, imagine, shift position. These were applied… to video transcript samples from both the intervention and the control groups at the mid-point of phase 2.

…the differences by that stage of the intervention were striking. Intervention group pupils were markedly more expansive in their contributions and exhibited much higher levels of explanation, analysis, argumentation, challenge and justification. Their talk, then, was clearly much more dialogic than that of their control group peers. Though there were between-subject differences, the overall pattern of intervention/control contrast obtained across all three subjects tested…

the intervention impacted positively on teacher questioning, teacher talk moves for probing pupil responses, the balance of recitation and discussion/dialogue, the length of pupil contributions and – critically for the quality of pupil thinking, understanding and learning – the pupils’ repertoire of what Alexander defines as ‘learning talk’.

Because the interventions were so wide ranging and the results so modest it is difficult to come to any conclusion about dialogic teaching as an approach to teaching and learning. There are also many imponderables, including the age of the children involved in the study. If they were older would the results have been more or less impressive? If the pupils were more secure in their subject knowledge, more expert, would they have gained more or less from Alexander’s methods?

The EEF report states that:

The approach, termed ‘dialogic teaching’, emphasises dialogue through which pupils learn to reason, discuss, argue, and explain in order to develop their higher order thinking as well as their articulacy.

When people talk about ‘higher order thinking’ I assume they are referring to some sort of taxonomy where ‘knowing stuff’ is at the bottom and ‘analysing or arguing about stuff’ is nearer the top. If so, is it then possible for teachers and pupils to move onto arguing about stuff too quickly and give the impression that ‘higher order thinking’ is being engaged, when in fact it isn’t? Can pupils ‘talk the talk’ but not ‘walk the walk’? A rejoinder to this might be but that is what the higher order thinking is for: to secure the knowledge. But, instead, could we be securing a method, beloved of some politicians, that of avoiding deep analysis because they want to avoid exposing a level of ignorance? I haven’t seen the videos and would love to see how probing the questioning was, how analytical the pupils were, how well constructed the arguing was, and also how all this talk reflected the quality of their ‘knowing their stuff’.

If we look at extracts from the ‘Coding Frame’ for analysis of video data we can see what was being measured. As far as I can ascertain it was the style of talk that was being analysed and not whether the talk was ‘correct’: 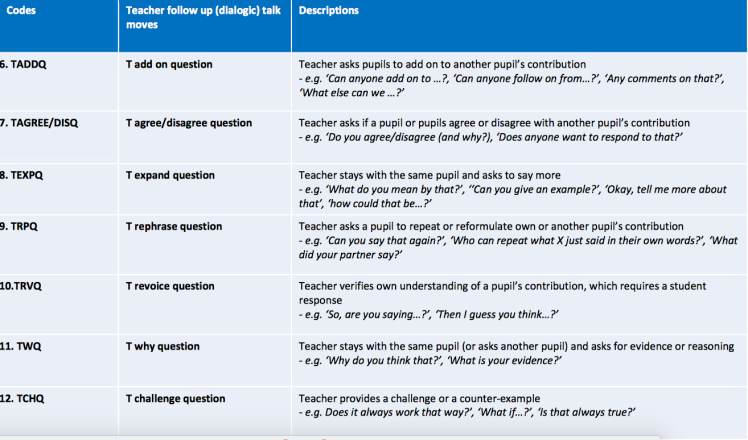 The analysis of the evidence seems to be of the talk and not its explicit connection to content. It is thus possible to suggest that whilst much of the talk might have been qualitative in terms of its performative nature, it might not be so in terms of the knowledge being discussed. Whilst the teacher asking ‘where’s your evidence?’ etc. might elicit the correct response, it might also elicit one that is completely wrong.  Of course, this might not be the remit of the study, but it should be of crucial concern to the quality of teaching and learning. Data that connects talk to the knowledge being discussed might help us evaluate what type of talk is helping or, maybe, hindering understanding. Or it might be too difficult to compile.

In which case, I put my finger in the air and say that clearly classroom talk is a good thing but, there could be superior methods of classroom talk especially for children of upper primary age where garnering a level of knowledge might be more important than being able to argue about it straight away. What if the

were helping pupils make more substantial gains in their learning than the use of a:

I just think sometimes I, and maybe other teachers, like to get on to the arguing, analysing and all the ‘fun’ stuff before enough knowledge has been secured. This can result in pupil confusion. In trivium terms I think of this as trying to get through the grammar quickly so that we can get onto the dialectic where the engaging stuff might be. Yet it’s not so engaging to discuss things that you don’t know anything about, and it’s better to listen a bit more to an expert talking about it, in other words, the teacher, or read a bit more about it in a book before one gets involved in a debate.

5 thoughts on “Classroom Talk, Some Thoughts on the EEF Report…”