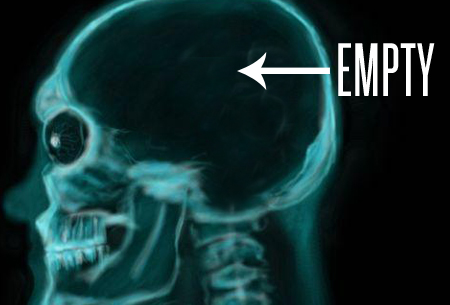 In order to celebrate ‘International Mindlessness Day’ the school had decided on holding a ‘Mindlessness Week’. Children and teachers had to wile away the time in mindless activities and, as usual, not much thought had gone into what this might mean. Teachers were expected to interpret the mindless edict in ways that they might see fit as long as they left any lack of initiative they might bring to the process until the last minute. Mr Bolt was adept at leaving things to the last minute so was able to put an iPad on every kid’s desk so that when they arrived all they had to do was log on. Most kids had thankfully forgotten their login details, those that hadn’t were sent home for not being suitably mindless. When, finally, all the children were playing the new blockbuster game Mindlesscraft, Mr Bolt was able to stare out of the window and ponder ‘how did it come to this?’ But answer came their none as his mind had suitably atrophied.

Senior Management were trawling the school with a ‘mindless walk’, bumping into each other, smelling of coffee and yesterday’s booze, they cascaded into a number of classrooms, holding tick sheets full of empty boxes and no descriptors, they were ticking boxes entirely for the sake of it and gave no thought as to reasons or consequences. The sheer mindlessness of the task was wonderfully artful but no-one had the sense to appreciate to what level this performance had risen, they had reached Tate-Modern levels of arched ‘un’-knowing pointlessness! Mr Bolt’s class were engaged in the lack of thought the oblong shaped shapes on the oblong shaped screens didn’t demand of them and were entirely engaged in the media-ocrity that was being undemanded of them, seven boxes were ticked by the Senior Leader who smiled on her way in, all the time she was there and on the way out.

The Head-Lack-of-Learner put it upon himself to visit the Library where up until this week there had been a surprisingly dangerous number of books cluttering up the shelves. He had embraced Mindlessness Week with aplomb, promising that the ‘Mindless-Village’ as the school was now to be known (though only after ‘school’ had become ”un’-known’) was going to prepare children for the 21st century – the ‘lack of knowledge’ century as it was not to be known as, but just accepted as. The 21st Century Skills that kids needed to acquire, for the jobs that will never exist because robots and AI will make human beings redundant, were those that enabled children to wile away the hours of their life with mindless pursuits whilst sitting, staring at screens. This meant that the library was shorn of all its books and monitors put in their place. Each screen was connected to the school mindless-cloud and each morning kids had to download nothing into their brains from the cloud and empty their minds of any rogue intelligent thought that had accidentally crept into being. This was achieved through the use of the ‘Tabula Rasa’ App that had replaced their school crest on the new school blazer which was connected to the ‘internet of things’.

At the beginning of the week a child had been expelled for bringing a book into the Library, a sure sign of her thinkingness was a pair of glasses and a studious expression. On her expulsion the child quoted from The Dunciad:

Nor public flame, nor private, dares to shine;
Nor human spark is left, nor glimpse divine!
Lo! thy dread empire, Chaos! is restored;
Light dies before thy uncreating word:
Thy hand, great Anarch! lets the curtain fall;
And universal darkness buries all

Thankfully, this time the Lie-brary was full of children, all Midwitch – Cuckooed, playing Mindlesscraft. Initially they had been told that they weren’t allowed to use the internet until it was realised what could have been a dangerous source of enlightened thinking was in fact better as a source of falsehoods and unthinking. The amount of crap kids were now able to fill their empty minds with, without thinking, was quite extraordinary. The Head-Lack-of-Learner was proud that his new charges were able to access without fuss flat-earthers, radicalised radicals, shock-jocks, safe-spacers, and all sorts of nut jobs to empty their minds of thought and fill them with new unthought. He also encouraged the use of mobile devices as long as they, too, encouraged empty headedness, so kids were encouraged to snap, to chat, to selfie, too vain, to vine, to send vitriol and self made porn to each other – what a wondrous week it was!

When the school returned to normal the week after, no-one noticed any difference. The Head had had an idea and with a little thought had ensured it went a long way… He called it his ‘No-idea’ and when asked by teachers and pupils if they should stop playing Mindlesscraft or whether they should get back to their studies… or whether… or whether… he just said ‘no idea’ and locked himself in his office to study data.