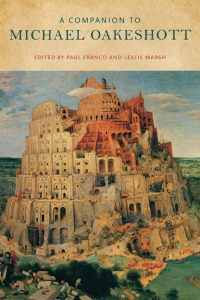 For Oakeshott: “…education is not a technocratic process of creating future workers, or even a simple transfer of knowledge. It is an adventure, an initiation into what he called “the conversation of mankind”. It is how we learn to be human.” Jesse Norman MP

How refreshing to think of education, not as a journey but as an adventure; if we jettison the idea of journey and the obsession of getting somewhere ‘worthwhile’ and on time, we can also jettison such concerns as the need for grit and resilience to endure this journey. Yes, there may be danger, we might have to take risks but we all have the wherewithal for adventure, especially when it is of itself and not a way to something else. This is an adventure, an exploration about what it is to be human.

This is very different to the ‘student voice’ idea trumpeted by David Hargreaves that was central to the work of reforming the education agenda in the ‘noughties’. Hargreaves wrote that:

“Student voice is mainly about how students come to play a more active role in their education and schooling as a direct result of teachers becoming more attentive, in sustained or routine ways, to what students say about their experience of learning and of school life.”

How mundane; how unadventurous, no wonder this became about teachers talking less and students expressing their opinions via toothless schools councils and about snotty nosed kids saying One Direction are better than Shakespeare when you’re trying to learn ’em a Sonnet or two.

And the LORD said, Behold, the people is one, and they have all one language; and this they begin to do: and now nothing will be restrained from them, which they have imagined to do.

Go to, let us go down, and there confound their language, that they may not understand one another’s speech.

So the LORD scattered them abroad from thence upon the face of all the earth: and they left off to build the city.

Why did the Lord ‘confound ‘our’ language?’ Maybe He didn’t trust the one direction, one voiced version of mankind beloved of some curriculum planners and middle managers: a single voice where all agree – a utopian place where mankind is at once at rest and lacking in adventure. This world would be inhuman: a utopian dream where everything is understood, what would be the point of that? Be born, have a look around, get bored, die. It is our differences that hold our interest. A conversation between interesting people talking about surprising, interesting things is a delight. And in order to initiate students into this world we have to ensure they are ready to be both interested and interesting. In our fascinating, complex, world a student who is constantly carping ‘this is boring‘ is herself boring for she is not taking part in the conversation, she is indulging in an act of cultural vandalism and we should not indulge her. In order to take part in the conversation a student needs to respond to the: “Manifold of invitations to look, to listen and to reflect…”

Oakeshott differentiates between the ‘real’ and the ‘ideal’ conversation of mankind. In the ‘real’ one he regrets the domination of a few voices, those of politics, and “science… with its eristic tones…” He wants a plurality of voices; the voices of humanity – akin to what Hannah Arendt described in this way: “The fact that men, not Man, live on the earth and inhabit the world… We are all the same, that is, human, in such a way that nobody is ever the same as anyone else who ever lived, lives, or will live.” The human condition is infinitely variable and complex, and invigorating. How much of our contemporary education world is trying to silence voices? How much of what we do has become deafened to other voices? Oakeshott’s ideal conversation allows no hierarchy and gives valuable space for the newly involved and the non-conformist voices, indeed it includes ‘the other’… In this we can find echoes in the words of Edward Said: “The renewable, almost sporty discontinuities of intellectual and secular impurities – mixed genres, unexpected combinations of tradition and novelty… No-one today is purely one thing… Labels are no more than starting points… In Eliot’s phrase, reality cannot be deprived of the other echoes that inhabit the garden.” These echoes are the different ideas and thoughts of different peoples that, as Oakeshott put it: “Take wing and play round one another, responding to each other’s movements and provoking one another to fresh exertions.”

This is the job of education to bring new people into the conversation, to get them to listen to different voices, to enable them to join in and help them to articulate so that they may be understood by fostering their voices. The teacher passes on the inheritance, as Hector puts it in The History Boys: ‘Pass it on boys, pass it on’… but also sets the younger generation off not as inheritors of a fixed body of knowledge but as participators in an ongoing conversation. This is revolutionary stuff in these days of ‘British Values’! Oakeshott understood the need for: “A plurality of discourse… As civilized human beings, we are the inheritors, neither of an inquiry about ourselves and the world, nor of an accumulating body of information, but of… a conversation which goes on both in public and within each of ourselves.”

The teacher ensures this conversation “does not deliver… a clear and unambiguous message,” the teacher ensures there is delight in doubt: “Certainties’ are shown to be combustible, not by being brought in contact with other ‘certainties’ or with doubts, but by being kindled by the presence of ideas of another order.” Here the challenge and possibility of new thoughts and ideas are always one utterance away. This conversational classroom does not want to hear students’ certain voices where they close down the answers to facts or opinion, we want fewer answers, but not necessarily more questions, maybe more thinking aloud allowed, and far more playful…

“Of course there is argument and inquiry and information, but wherever these are profitable they are to be recognized as passages in this conversation, and perhaps they are not the most captivating of the passages. It is the ability to participate in this conversation, and not the ability to reason cogently, to make discoveries about the world, or to contrive a better world, which distinguishes the human being from the animal and the civilized man from the barbarian… Education, properly speaking, is an initiation into the skill and partnership of this conversation in which we learn to recognize the voices, to distinguish the proper occasions of utterance, and in which we acquire the intellectual and moral habits appropriate to conversation.”

Liberal learning is an education in imagination, listen to its voices.

26 thoughts on “Voices: An Initiation Into The Conversation Of Mankind.”